Bell peppers are in fact a fruit but are widely regarded as a vegetable. We can buy bell peppers all year round, but Summer is when they are at their very best. Bell peppers are a really common vegetable but sometimes we get stuck in a rut and use them the same way all the time. Peppers have a sweet flavour and a crunchy texture when eaten raw. The most popular peppers are red, green and yellow. They are versatile and very easy to prepare.

Bell peppers are sometimes called capsicums and they are a member of the nightshade family of vegetables. They are related to tomatoes and chilli peppers.

Bell peppers are loaded with vitamins, minerals and antioxidants, with red peppers being exceptionally high in vitamin C. They also contain decent amounts of vitamins A, E and K, folate and potassium.

Bell peppers were first cultivated in South and Central America before being discovered by European explorers. We can thank Christopher Columbus for bringing them back to Europe in the late fifteenth century. Since then they have gained widespread popularity in Europe.

What to do with bell peppers

The most common varieties of bell peppers are green, yellow and red. Green is a less ripened pepper while red is the most ripened. The more riper a pepper is, the sweeter it is. Without a doubt, I prefer red and yellow peppers to green, but that's not to say green peppers can't be a great addition to certain dishes. Chose peppers that are firm and have no sign of bruising.

One of my favourite ways to cook bell peppers is to char them on a grill so that their skins blister and peel right off. This leaves you with sweet pepper flesh on the inside. This works best for red and yellow bell peppers. If you don't have a grill, you can use a gas stove and put the peppers directly on the gas flame. If you don't cook with gas, you can achieve a similar result by roasting the pepper in the oven for about 35 minutes.

If you have been following my #VegoftheMonth series of blog posts, you will know that vegetable dips are a really easy and tasty way to eat vegetables. Roast red pepper and walnut dip tastes so delicious and well worth spending a few minutes whipping up a bowl. Take 3 red bell peppers, a clove of garlic, 1 cup of toasted walnuts (to toast, place on baking tray in a medium oven for about 6 minutes), a half teaspoon of smoked paprika, juice of half a lemon, 2 tsp of olive oil, pinch of sea salt and freshly ground pepper. Roast the peppers until the skin is blistered. Peel and discard the skin and seeds and put the peppers in a food processor. Add any juices left over from roasting the peppers to the food processor too. Add the remaining ingredients and process into a smooth dip. To serve, spoon into a serving bowl and scatter any leftover toasted walnuts on top.

Raw bell peppers work really well in salads due to their crunchy texture. This salad works so well served alongside other salads or as a side to fish or meat. Take 3 peppers (a red, green and yellow). De-seed the peppers and using a mandoline slicer or a sharp knife, slice the peppers very thinly. Place in a large bowl. Take a red onion, peel it and slice it very thinly and add it to the peppers. Dress this salad with a creamy almond dressing. To make this dressing, add 4 tablespoons of almond butter to a food processor along with the juice of half a lime, a half inch of ginger, a clove of garlic a tablespoon of tamari and a few tablespoons of water. Process until smooth and season with sea salt and black pepper.

I adore Mexican food; something to do with the combination of avocado, lime and chilli. Fajitas are so delicious and satisfying and super easy to make. You don't really need to follow a recipe; just make them to suit your own taste preferences. For my go-to fajita recipe, thinly slice 3 bell peppers, a yellow onion and 2 large portobello mushrooms. Heat a large pan over a medium heat and add a tbsp of olive oil; then add the onions and peppers. Season with sea salt and add a tsp of ground cumin and half a tsp of hot smoked paprika. Cook until the vegetables have softened, about 8 minutes. Remove from the pan and set aside. Heat a tsp of olive oil in the pan and add the mushrooms. Cook over a medium heat for five minutes. Remove from the heat and add the mushrooms to the peppers and onions. To accompany the fajitas, make a guacamole by scooping the flesh from two ripe avocados into a bowl. Add the juice of a lime and a pinch of sea salt. Mash using a fork or potato masher. Gently heat six tortillas. I like to allow people to assemble their own tortillas; Serve the tortillas on a plate, along with the bowl of vegetables and the guacamole in a separate bowl. If you like, serve a hot sauce or sour cream along with the fajitas.

Green peppers seem to be the poor relative of the red and yellow pepper. Peppers are often sold in packs of three, with one yellow, one red and one green. If you are the one who always has the green one leftover with no idea what to do with, this chana masala is the perfect recipe for you. My favourite chana masala recipe is adapted from a recipe from the Oh She Glows Cookbook by Angela Liddon. The ingredients are 1 tbsp coconut oil, 1 tsp cumin seeds, 1 yellow onion finely chopped, 1 clove of garlic minced, 1 inch ginger minced, 1 green pepper finely chopped, 1 tsp garam masala, 1 tsp ground coriander, 1/2 tsp ground turmeric, pinch of sea salt, 1 can whole tomatoes, 1 can chickpeas drained and rinsed, handful of chopped coriander. Heat the oil in a large saucepan over a medium heat. Reduce the heat to low and add the cumin seeds. Toast for a minute, raise the heat and add the onion, garlic, ginger and green pepper. Cook for five minutes, stirring regularly. Add the garam masala, ground coriander, turmeric and sea salt and cook for two minutes. Add the tomatoes and chickpeas and raise the heat to medium/high. Bring the mixture to a simmer and cook for ten minutes. To serve, garnish with freshly chopped coriander.

Roast tomato and red pepper soup is so tasty and very easy to make. Preheat the oven to 190C/gas mark 5. Take 3 ripe tomatoes, 1 red pepper, 1 yellow onion and cut them into wedges. Place on a baking tray with the garlic. Drizzle with olive oil and season with sea salt and black pepper. Toss well to ensure the vegetables are coated in the oil. Roast in the oven for 45 minutes. Soak half a cup of cashew nuts in hot water. Heat a cup of vegetable stock in a large saucepan. Add 4 tbsp of tomato paste and the roasted vegetables to the saucepan. Bring to a boil and reduce the heat and simmer for ten minutes. Drain the cashew nuts and add them to the saucepan. Blend into a soup using an immersion blender. Season with sea salt and pepper. 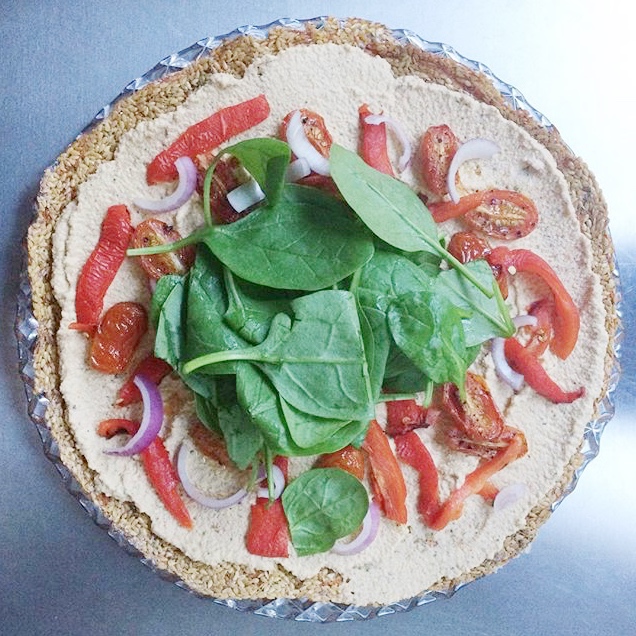 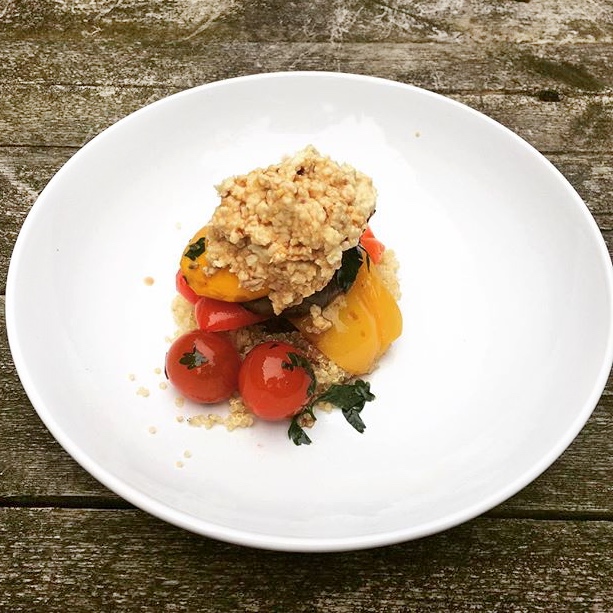 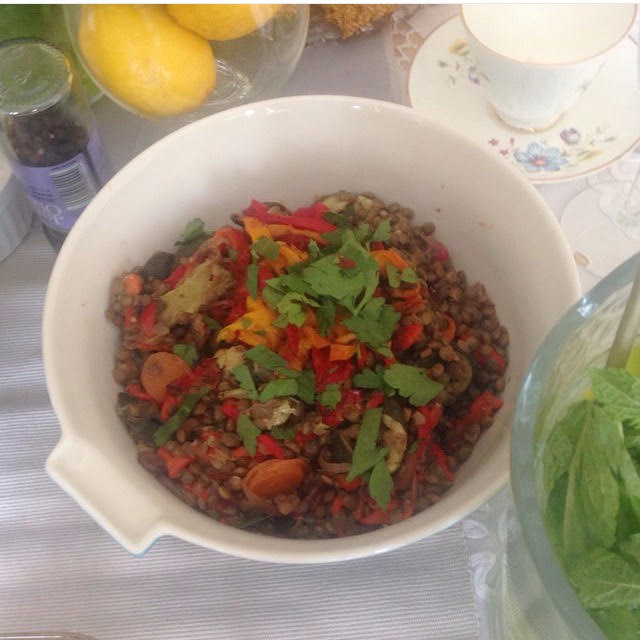 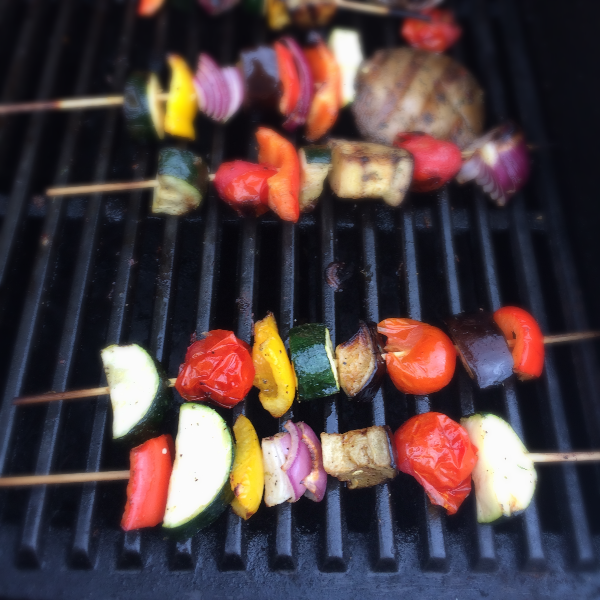 As usual, this is where I need your help. To help spread the pepper love, I would really appreciate if you shared this blog post on your social media. Even better, I would love for you to share your own ideas for using peppers in interesting and different ways. Just use the hashtag #vegoftheweek and tag the Honest Project to get involved. This campaign is about helping each other eat more vegetables in super tasty ways and so it isn't limited to vegan and vegetarian recipes. If your favourite recipe containing peppers also has meat, fish or dairy, I would love to hear it. This is about eating more vegetables and allowing them to shine, so I want to hear whatever works best for you.

On Wednesday, I will be posting a new recipe for a dish featuring peppers on the blog!! I will be doing a 'live' cookery demo showing you how to make this dish on snapchat. So if you would like to bring #VegoftheWeek to your own kitchen, follow me on snapchat (username: thehonestproj) and join in the cooking.

Thanks so much for joining the #VegoftheWeek party.